At the request of some members of the sangha, I have assembled the beginning of what can grow to be a longer list of books that everyone should probably be acquainted (if not intimate) with. These are in addition to what should go without saying: all of Deshimaru’s works, all of Robert Livingston’s kusen, Philippe Coupey’s commentaries on the Shinjinmei in In the Belly of the Dragon, and my Zen books, including Mushotoku Mind (my edition of Deshimaru’s commentary of the Heart Sutra) and No Fear Zen (2015). 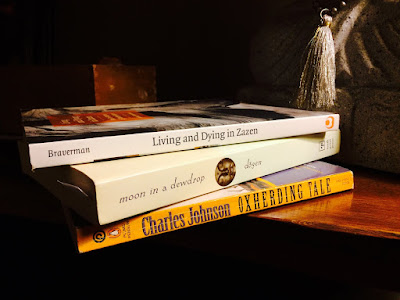 If you read one of the books on this list each month, that’s a pretty good dose to digest in a year. I have included a variety of writings, from philosophy and commentaries, to historical and fictional narratives. There should be something for everyone and for every mood.

Entering the Stream: An Introduction to the Buddha and His Teachings
Ed. Samuel Bercholz and Sherab Chodzin Kohn. 1993.


This anthology contains a survey of original pieces from various Buddhist lineages, both ancient and modern. It’s a good way to get a taste of the various tributaries to the “stream” of ideas that have flowed down to us. It was originally put together as a supplementary reading list for Bernardo Bertolucci’s rather silly film with Keanu Reaves as Siddhartha Gautama, but don’t hold that against it.


The first Zen book for many, and still probably the first essential book for any beginner (in other words, for all of us). Classic, short introduction to Zen practice delivered through Suzuki’s brief talks, collected and edited by his students. Suzuki at his best, with his personable voice conveying his accessible teachings in a palatable format.

Three
Zen in the Art of Archery
Eugen Herrigel. 1953.


When the German philosopher Herrigel went to Japan to study Zen, he was told that he should find a practice if he really wanted to understand it. He chose kyodo (archery) and wrote a classic about his experience. At the same time, his wife, Gustie L. Herrigel, had a parallel experience with ikebana and wrote a book that is an excellent companion to his: Zen in the Art of Flower Arrangement (1958). Gilbert Highet also wrote a useful review of Herrigel’s book called “The Mystery of Zen.”


A most memorable Zen memoir by the Dutch crime novelist who was one of the first Westerners to spend an extended time training in Japan. He has two other books that are sequels to this, but this is the one that will stay with you. The inside look at a Japanese monastery confirms the adage that if you are ready for a Zen teacher you don’t need to go far away to find one: one will appear next door.


One of my favorite Zen books. For the Kodo Sawaki lineages, of which ours is one, this is essential reading. It can be paired with Dharma Brothers, Arthur Braverman’s novel about Kodo Sawaki and Kozan Kato, who are two of the five masters covered here. The others are the grass harp master Sodo Yokoyama, the indomitable nun Motoko Ikebe, and Kodo’s successor at Antaiji, Kosho Uchiyama.


Why do we focus on certain “liturgical” texts when Zen is supposedly concerned only with “mind-to-mind” transmission outside scriptures? This book explains why. Texts include those chanted daily like the Four Great Bodhisattva Vows, the Kesa Sutra, the Meal Chants, and the Heart Sutra, as well as those chanted at certain ceremonies like the Verse of Repentance, the Verse of the Three Refuges, and the Sandokai (Merging of Difference and Unity).

Hagakure: The Book of the Samurai
Yamamoto Tsunetomo. (Trans. 1979).


This belated commentary on bushido (the way of the warrior) gives us a glimpse of the inner life of the samurai in the eighteenth century. Read it and then watch the film based loosely on the book, listening for echoes in Jim Jarmusch’s film Ghost Dog: The Way of the Samurai (1999) with Forrest Whitaker.

How the Swans Came to the Lake: A Narrative History of Buddhism in America
Rick Fields. (Updated edition) 1992.


To understand the brief but dynamic history of Buddhism in America, of which we are all a part, read this book. Like many other histories, it neglects our lineage, but aside from that it gives a good idea of how Buddhism took hold over the past 150 years. For mention of our lineage in Europe, you might read The Awakening of the West: The Encounter of Buddhism and Western Culture (1994) by Stephen Batchelor.


This brilliant and underrated novel by Pulitzer Prize novelist Charles Johnson takes on the issue of freedom on a number of levels by combining the philosophical novel, the slave narrative, and much of traditional Eastern wisdom writings. It helps to know that Johnson is a martial artist, philosopher, teacher of creative writing, and cartoonist, as well as Zen practitioner. He has a number of writings on Zen, especially its importance for African Americans, in Turning the Wheel: Essays on Buddhism and Writing (2007) and Taming the Ox: Buddhist Stories and Reflections on Politics, Race, Culture, and Spiritual Practice (2014).


A beautiful recent novel that brings together contemporary Japanese and American cultural issues, clarified by the perspective provided by Dogen’s difficult “Time-Being” (“Uji”) text from the Shobogenzo.


Moore travels to various retreats and teachers in the United States and finds something for us to laugh about everywhere, with his usual good humor and generosity of spirit.


There are a number of editions of Dogen’s Shobogenzo available, from Nishijima and Cross’s several-volume edition to the recent one edited by Kazuaki Tanahashi and published by Shambhala. Both have their strengths. There is also an English version by Nishiyama. Many of the key parts of the Shobogenzo can be found online, notably at www.thezensite.com . Key Dogen texts that everyone should know are: Zazengi (Universal Recommendation for Practicing Zazen), Uji (Time-Being), and Sansuikyo (Mountains and Waters Sutra).

Email ThisBlogThis!Share to TwitterShare to FacebookShare to Pinterest
Labels: reading-lists