What Is "True" Zen Practice? 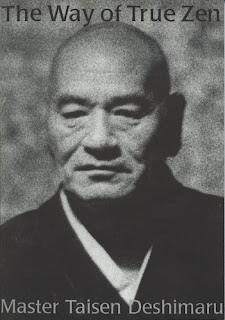 When the American Zen Association republished Deshimaru’s The Ring of the Way, the title became The Way of True Zen. Some have objected that “true” Zen is either an arrogant claim that Deshimaru’s is the only “real” Zen or that “true” Zen (being always paradoxical) is an oxymoron, at least for those allergic—and perhaps hypersensitive—to any hint of dogma.

When we say “true Zen,” though, we don’t mean true as in “I am the way, the truth, and the life” (John 14.6), but rather as in “my aim is true” (Elvis Costello, Columbia Records, 1977). True Zen practice is sincere, dedicated, unswerving, like an arrow that has been trued, like a plank that has been leveled, like a wheel that has been balanced.

The etymology of the word might be helpful. The Old English “treow” (tree) is related to “treowe” (true). I often urge students to sit in zazen like a tree in the wind, firmly rooted, not sinking or settling but with head pressing the sky. Going further back, the Indo-European root is “deru-“ or “dreu-“ and refers to wood and indicates strength or firmness. The ancient Celtic druid priest, for example, was a “dru-wid” or strong seer of the truth.

Firmness, balance, and wisdom. These are the attributes of true Zen practice.