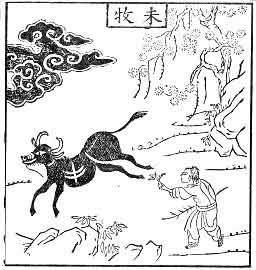 Ten Oxherding Pictures
By Zen Master Kakuan, China, 12th C. A sequence of ten illustrations depicting the levels of realization in Zen, these ancient drawings with Verse and Comments are presented in two new English translations along with contemporary commentary.

Oxherding Pictures in Buddhism Now
The following pictures come from Songgwangsa, Korea, and are found on the outside walls of a meditation hall.