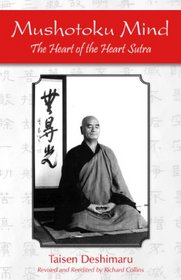 Writings on the Heart Sutra are extensive ranging from highly academic scholarly treatments to compilations of dharma talks for the lay practitioner. This is understandable considering that the Heart Sutra functions as a terse and concise distillation of an extensive body of writing along with the central place the Heart Sutra holds in the “emptiness literature” of  the Perfection of Wisdom tradition in Mahayana Buddhism. This edition is, in my opinion, one of the most outstanding contributions to the subject. It is balanced, thorough, beautifully presented and highly accessible for both the dharma practitioner, the student of comparative religion and for the curious casual reader.

The book is based on a series of talks given on the Heart Sutra by Taisen Deshimaru, Roshi in Paris between 1977 and 1978. Deshimaru, a student of Kodo Sawaki, was instrumental to introducing Zen study and practice to Europe. While originally presented as a series of oral teachings the book maintains a good level of continuity. Deshimaru conveys a strong sense of scholarship without a loss of directness. I believe that this is the result of careful and sensitive editing of this new edition by Richard Collins who is both a dharma teacher and an English scholar, holding the Ph.D. in English literature. His thoughtful introduction sets the tone for the book and captures its essence.  For instance, he writes:


As a Soto sangha in the tradition of Dogen Zenji, the New Orleans Zen Temple asked something else of me: simply to empty my preconceptions and to live in the here and now, doing what needed to be done, with a mushotoku attitude, with no thought of personal profit or gain (pp. xi-xii).

To read the rest of the review, visit Sweeping Zen.