Here and Now October 2014 has arrived. Click the link or image below to read and download this edition of the American Zen Association (AZA) newsletter. 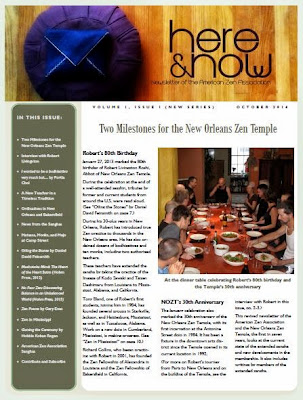 The AZA is the umbrella organization of sanghas established in the lineage of Robert Livingston Roshi, Abbot of the New Orleans Zen Temple. Founded in 1983, AZA is devoted to teaching Zen in the tradition of Taisen Deshimaru and Kodo Sawaki. In addition to Robert Livingston, teachers in this lineage are Tony Bland of the Mississippi and Alabama groups and Richard Collins of the Alexandria (Louisiana) and Bakersfield (California) groups.