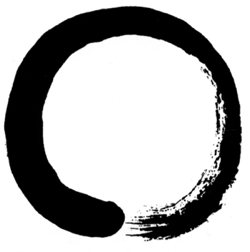 I used to see pictures of bodhisattvas, and I wanted to be one. I thought that it was an extraordinary person and took extraordinary effort to be a bodhisattva. I did not think that I could attain “bodhisattva-hood” until at Zen Fellowship Bakersfield I was told that all it took was the willingness to save-help-care for all beings. Also, a bodhisattva could live in the world, outside of the temple. This was important as I had a family and was working.

I wanted to be a bodhisattva, very much, but felt that I was not ready. I had started to memorize the “Heart Sutra” which is in Japanese; and I memorized the sounds without knowing the meaning over several months. I thought if I made the effort and could memorize the sutra, I could make the effort to practice the Way of a bodhisattva. The ordination ceremony was beautiful, outdoors among tall, stately pines in Bakersfield. I was deeply moved by my new name, Ryoji Bodhi, which means “compassionate healing.” My family and friends were at the ordination. I continue in the usual relationships with them.

Since the ordination, I listen to persons more intently, and listen with the mind of caring for them. This way of listening allows the other person to speak genuinely. This practice has also helped me. I get anxious in new situations with new people. I now convince myself that all I have to do is to listen and visualize taking the person(s) across to the other side. So simple. I am at ease and practice the Way.